Here we describe the results of the project Future Weather (which ran from 2009 to 2011). In Future Weather we investigated a number of impact relevant weather conditions in the (present and) future climate.

Future Weather has been financed by the national Dutch program Knowledge for Climate (KfC). The work has been carried out primarily by KNMI.

The impact of climate change will manifest itself in our future weather. Future Weather focused primarily on changes in precipitation extremes on different scales ranging from intense showers at local scales to multi-day precipitation extremes over the Rhine catchment area. We also considered a worst case scenario of a combined wind and discharge extreme. Besides quantitative results, we also put effort into understanding these extremes on a process level.

During the execution of the project two (record breaking) extreme precipitation events occurred: 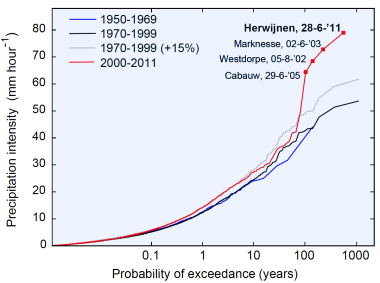 Hourly precipitation amounts in Herwijnen on the 28 June 2011 were record high. The four highest observations in the Netherlands were all recorded after the year 2000.