This was found by: 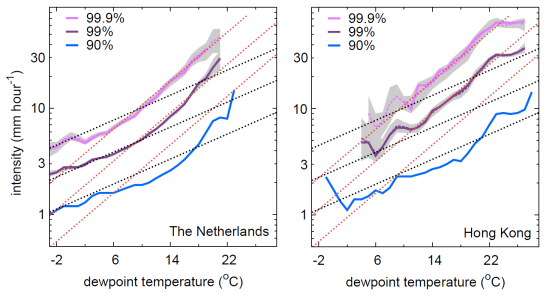 The intensity of extreme showers, as measured by observed hourly precipitation sums, follows a dependency of 14 % per degree. A doubling of intensity occurs each 5.3 degree temperature rise. This figure is derived from observations in Hong Kong (1886-2010) and apprximately 30 stations in the Netherlands (1995-2010).Plotted is the dependency on dew point temperature, which is usually 4-8 degrees below the air temperature. 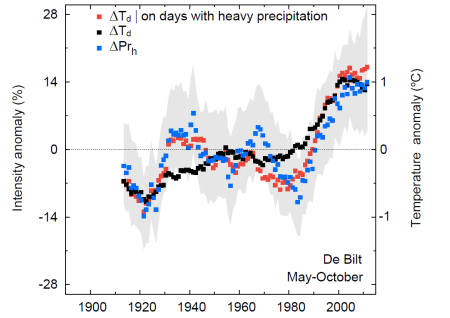 The intensity of extreme hourly precipitation (blue symbols) is at present 10 to 15%  higher than before 1990. This increase is likely attributed to the warming of 1 degree in The Netherlands.

The red symbols show the dew point temperature at days with heavy rain. The time evolution of this temperature is very similar to the time evolution of the anomaly in precipitation intensity. This shows that there is a likely link between the dew point temperature at those days and precipitation intensity. This adds to the evidence from the figure (left panel) above which is derived from data of the last 15 years only (using a different analysis methodology).