This was found by:

The storm surge barrier near Hoek van Holland, the Maeslantkering, protects the densely populated Rotterdam area when high sea levels occur due to wind storms, the tide and pressure effects. It closes automatically when the water level is predicted to exceed the mean sea level by more than 3m. A worst case scenario is that of simultaneous occurrence of extreme storm surge and extreme discharge of the rivers Lek and Rhine. In the event of an extreme discharge alone, the barrier should remain open to prevent the damming of excess water. In the event of a surge, the barrier should be closed to protect the densely populated Rotterdam area.

In present estimates of the probability of such a worst case scenario, it is assumed that the storm surges and high discharges are independent events. But since both rainfall events and winds storms are caused by the same weather systems – synoptic low pressure systems often called depressions – this assumption of independency could be challenged. Because both events are rare it is, however, difficult to establish their dependency. For this reason we could not use observational time series, but had to rely on the much longer time series generated by a climate model.  We used the control period 1950-1980 of all 17 members of the ESSENCE global climate model ensemble, thus providing us with 500 years of simulated data for the present-day climate. 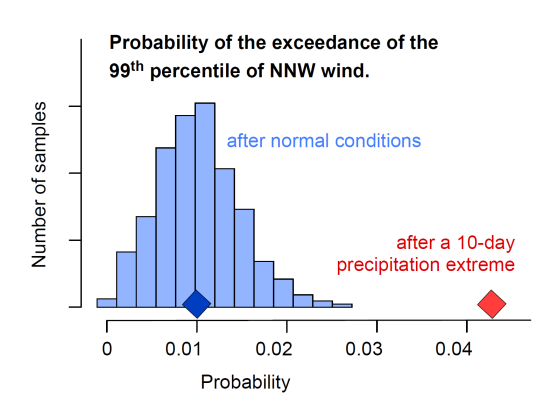 Probability of the exceedance of the 99th percentile of NNW wind. After a 10-day precipitation extreme the probability of exceedance is approximately 0.04 (red diamond), which is a factor 4 higher than the probability of 0.01 (by construction) in the full data set (blue diamond). The increase in probability is outside the range that could be expected due to chance because of the much smaller sample size (blue bars).