Argo floats (or profilers) are autonomous devices that measure temperature, salinity and pressure (p, equiv. to depth) between the ocean surface and a depth of 2 km. Once put into the water, they actively descend and ascend between the surface and a  depth of 2  km in a 10-day cycle, while they are passively carried by horizontal currents. At the surface they send their data via satellite to a data centre. Temperature and salinity are the main physical properties of the ocean. They determine density and thus pressure, and, via the geostrophic relation, currents. The temperature distribution determines the thermal expansion of the ocean and thus partly the sea level rise. KNMI represents the Netherlands in the Euro Argo ERIC.

How do Argo floats work?

It is well-known that winds are produced by pressure differences in the atmosphere. On the northern hemisphere, the air moves (counter)clockwise around (low) high pressure systems, and vice versa in the southern hemisphere. In the same way ocean currents are driven by pressure differences in the water. The pressure dpends on the density (mass per volume - kg/m3) of the sea water, and the denssity depends on temperature (the colder, the denser) and salinity (the saltier, the heavier). The two parameters temperature (T) and salinity (S) are thus very important to determine currents in the ocean. In most places, ocean currents are too slow to measure them directly.

Unlike currents,  temperature and salinity are relatively easy to measure. However, the ocean is very large and deep, and the depth is unreachable by most ships. You need a specialized vessel from which measurement devices are lowerd into the water. This is expensive and time consuming, and only a few measurements can be taken every year.

The solution to this problem are Argo profilers (or floats). They are autonomous instruments. Once deployed into the water, they operate withouot human interference. Furthermore, they are relativley cheap (± 14.000 euro per float) and easy to deploy (you can just throw them over bord!). They live for about four years, during which they measure profiles of T and S down to two kilometres every ten days. 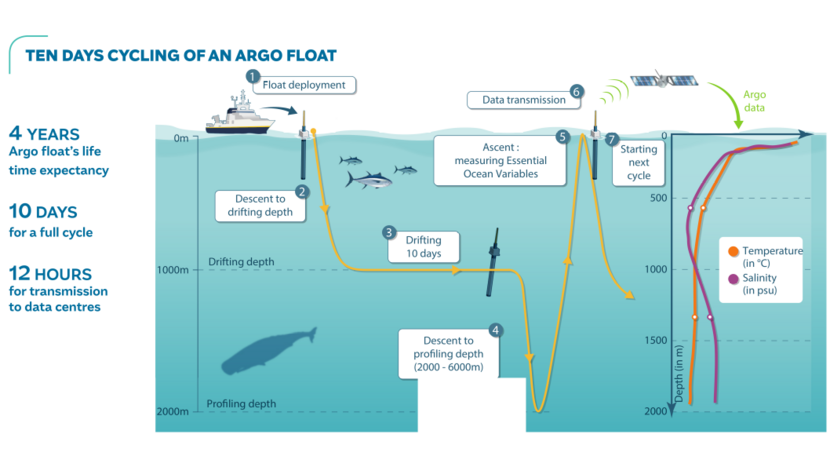 From the surface, the floats dive to their parking position at a depth of one kilometre (2), where they are safe from ship propellers and fishing nets. After 10 days (3), they descend further down to two kilometres (4), followed by a steady ascent (5) to the surface. During the ascent, they continuously measure T and S. At the surface (6) they transmit the measured data via satellite to a data centre, after which they start a new cycle (7).

The ocean is very large. To get a good view of the development of temperature and salinity in the ocean, Argo aims at having one float per every 3°×3° box. this means roughly 3000 floats. Such a large number can only be reached through international cooperation, which is coordinated by the Argo Project Office. Every institute or country contributes by buying and deploying floats. Presently (Dec. 2019) about thirty countries contribute, and around 4000 floats are active, allowing for a higher float density in highly variable regions.

The European countries that are involved in Argo have eamed together. In 2014 they founded the Euro Argo ERIC (ERIC = European Research Infrastructure Consortium) to coordinate their activities and act together internationally. KNMI represents the Netherlands in the Euro Argo ERIC.