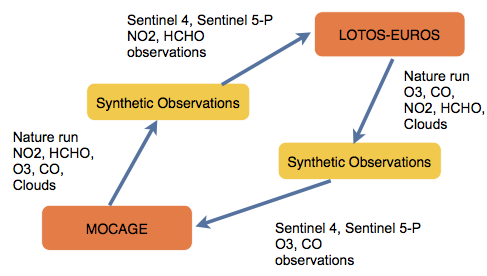 "Cross-OSSE" approach: the two model involved both deliver the Nature run (to generae the synthetic satellite observations used by the other model) and perform the OSSE assimilation runs.

The ISOTROP project aim is to quantify the impact of the European Sentinel 4 (GEO) and 5 (LEO) measurements of O3, CO, NO2 and HCHO to better constrain pollutant concentrations and precursor emissions that influence air quality. The project is based on a cross-OSSE approach which involves two independent air quality models. Each of the models generated the nature run for the other model, used subsequently in two linked OSSE studies. The models involved are MOCAGE (Meteo-France), and the air quality model LOTOS-EUROS (TNO/KNMI) combined with the global TM5 chemistry-transport model (KNMI) which are both run at high resolution (up to 7 km). The work is based on synthetic observations and their error characteristics derived by the KNMI and FMI teams involved in the TROPOMI retrieval algorithm development.

The project was finalised in winter 2017. This website provides access to the final report, the more detailed OSSE and synthetic observation reports, as well as a series of presentations and references.

Example of (noisy) synthetic observations of CO for one overpass of the Sentinel 5P platform.